A brief history of copyright

The cornerstones of modern copyright law, the right to be identified as the creator or the work and economic property rights, have their roots in ancient Greek, Roman and Jewish cultures, and can be traced back as far as the 6th century B.C.E. in ancient Greece; but it was not until use of the movable type printing press became widespread across Europe that the need for statutory regulation was realised.

The first recorded movable type printing for printing paper books was in China around 1040. These early presses used either ceramic or wooden movable type and were invented by Bi Sheng (990–1051). By the 12th century China was printing using bronze metal type. There are also records printing in Korea using bronze movable type dating back to the 14th Century.

In Germany, around 1440, a goldsmith named Johannes Gutenberg created a printing press that used metal movable type. The type was cast from an alloy of lead, tin and antimony. The lead, tin & antimony alloy melts at a far lower temperature than bronze, making it easier to cast. This meant that reusable metal moulds (called matrixes) could be used to cast the type, making it far quicker to produce the metal type. 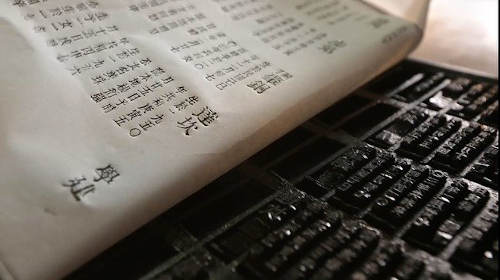 A single Gutenberg press could produce around 240 impressions per hour, perhaps 2000-3000 pages a day, easily 100 times faster than hand printing or hand copying, this drastically reduced the cost of printing. Adoption of this press was fairly rapid, in 1457 there was a single press in a print shop in Mainz, by 1480 there were 110 presses in Europe. Anyone could buy or rent a press and, as there was no copyright law in Europe at the time, new works were quickly republished by competing printers. This brought about some very positive social changes in the short term, prices of reprints were low, output grew exponentially, so publications could be bought by poorer people, and Europe saw a swift rise in literacy.

As time went on, European governments set up systems of licensing controls over printers, issuing individual printers exclusive licenses to print a particular work for a period of time. This prevented others printers from reproducing the same work during that period. This had the effect of maintaining a higher price for the work for that period – to the benefit of the printer and author.

As early as 1483, Richard III recognised the value of literary works and encouraged the spread of printing, whilst at the same time seeking to limit and censor texts deemed to be harmful to the church and crown. The Printers and Binders Act 1534, banned the import of foreign works and enabled the Lord Chancellor to limit the price of books. Further censorship was introduced by Henry VIII who required that all books should be approved before publication. In 1557 the Stationers' Company received its Royal Charter from Mary I, giving the company the power to decree who could print books, and the right to seize illicit or pirated works. This was not copyright as we understand it today, but rather a monopoly granted to the printer (publisher) to copy a particular work.

The Licensing of the Press Act 1662 built on this framework and titled as “An Act for preventing the frequent Abuses in printing seditious treasonable and unlicensed Books and Pamphlets and for regulating of Printing and Printing Presses". Now the Stationers' Company had the responsibility to censor literary works. The Act had a 2 year duration clause and so had to be renewed by Parliament every 2 years; but censorship led to public protest and, in 1694, Parliament refused to renew the Act.

The Stationers' Company campaigned for new legislation to restore their role. This failed, but the failure led to a important change in tactic and viewpoint familiar to modern copyright law. Instead of focussing on the printers and publishers, Stationers’ now argued that the authors should have a right of ownership in what they wrote. This argument persuaded Parliament and led to the enactment of the first Copyright Act, the Statute of Anne, in 1710.

The Statute of Anne

For the first time copyright belonged to authors rather than the printers and publishers. The Statute of Anne begins
"Whereas Printers, Booksellers, and other Persons, have of late frequently taken the Liberty of Printing, Reprinting, and Publishing, or causing to be Printed, Reprinted, and Published Books, and other Writings, without the Consent of the Authors or Proprietors of such Books and Writings, to their very great Detriment, and too often to the Ruin of them and their Families:"

The Statute of Anne remained in force until it was replaced by the 1842 Copyright Act, and was greatly influential in the formation of other copyright laws across the world.

Whilst the earliest copyright law only applied to the copying of books, this evolved over time as society developed to include the wide range of literary and artistic works including paintings, photographs, sound recordings, films & video, software, music, etc. and extended to include translations and derivative works.

In the modern era, most national laws are written to provide authors and artists at least (and often exceeding) the minimum protection stipulated in the conventions that the county is a signatory to, most important among these is the Berne Convention. Please see our international copyright page for more details.

The current UK legislation is the 1988 Copyright Designs and Patents Act, which has been periodically updated to reflect changes or accession to to international conventions, European law, and societal changes. The current UK law is discussed in our fact sheet P-01 UK Copyright Law.